skip to main | skip to sidebar

Modern birds are a class of vertebrates characterized by being feathered, warm-blooded (endothermic), and bipedal (two-legged); and by having very high metabolic rates and a forelimb modified into a wing which, together with a long tail, forms part of a flight mechanism. The feathers of birds are filamentous, lightweight modifications of the outer skin that have remarkable aerodynamic qualities. They serve not only as flight structures by generating lift and thrust but also as insulation to maintain high body temperatures. In addition, birds have lightweight hollow bones, a well-developed air-sac system and flow-through lungs, a wishbone or furcula (fused clavicles), and a hand reduced to three digits (comparable to digits 2, 3, and 4 of the human hand). Birds are known to have evolved from some group of reptiles within the larger group of ancient diapsid reptiles known as archosaurs. However, debate still centers on whether they are derived from a common ancestor with the theropod (meat-eating) dinosaurs (a group known as basal archosaurs), or later in time directly from theropod dinosaurs.

Feathers are unique to birds. These lightweight structures made of keratin are the most complex appendages produced by the skin of any vertebrate. The bird wing comprises two sets of flight feathers, the outer primary feathers which are attached to the hand, and the inner secondary feathers which are attached to the ulna. The vanes of the wing feathers are asymmetric with a smaller outer vane and larger inner vane, producing lift in flight. The body feathers provide small aerodynamic contours which result in laminar airflow in flight. Most of the vane is stiff and tightly bound, like flight feathers. However, the basal portion can by fluffed up to trap body heat next to the skin. In warm conditions the body feathers can be flattened to allow heat to escape. Thus, feathers form an insulatory pelt to cover the surface of the avian body. The tail feathers resemble the flight feathers of the wing and provide lift in flight. The tail feathers of modern birds are attached to a specialized bone known as the pygostyle, which is formed by a number of fused tail vertebrae. The pygostyle (sometimes called the plowshare bone) also accommodates the uropygial gland, or oil gland, an essential part of the anatomy of birds that provides a rich waterproofing oil for preening the feathers. In addition to their primary functions of flight and insulation, feathers can serve other functions, ranging from the production of color patterns and structural forms that allow for species recognition and courtship displays, to color patterns that serve a cryptic purpose for protection.

The once-toothed jaws of birds have evolved into the lighter beak in which the upper and lower jaws are covered by a horny rhamphotheca, which may vary in texture from the rock-solid beaks of predatory raptors to relatively soft beaks of shorebirds and ducks. Beaks have a great variety of adaptive forms, including the flesh-tearing hooked beaks of hawks and eagles, the filter-feeding straining beaks of flamingos and ducks, the fish-trapping beaks of pelicans, the climbing and nut-cracking beaks of parrots, the hammering beaks of woodpeckers, and the seed-eating beaks of finches. Birds have developed a muscular gizzard (also found in their relatives, crocodiles and dinosaurs) for grinding and processing food into small pieces. The grinding is often assisted by the addition of gizzard stones, which are ingested.

Birds have varied feet. The most primitive avian foot, found in the earliest known bird, Archaeopteryx, is the perching foot also found in most modern tree-dwelling birds. Three toes point forward, and a reversed first toe, or hallux, opposes them in perching on a branch. This type of foot is called anisodactyl. Other modifications include the zygodactyl feet of woodpeckers with two forward and two rearward pointing toes, and the webbed feet of ducks with the three forward pointing toes united by a web that serves as a paddle. The varied birds in the order Pelecaniformes have a foot in which all four toes are united by webbing, a totipalmate foot. Ostriches are unique in the bird world in having a foot with only two toes. The ankle and foot bones are fused and elongated in birds, so that the avian leg consists of a femur, tibiotarsus, and fibula, then a fusion of three bones into a tarsometatarsus, and finally the toes. Thus, birds walk on their toes, and the equivalent to the human foot is a long bone, the tarsometatarsus, which is off the ground.

Birds have keen senses of vision and hearing. The sense of smell (olfaction) is not particularly well developed, although in some birds there is a good sense of smell. Birds have developed a flow-through lung and an extensive air-sac system. Modern flying birds have a well-developed sternum with a keel, or carina, for the attachment of the large flight musculature.

Birds are found over the entire Earth. One of the most intriguing aspects of bird biology is the ability to migrate exceptional distances. Birds possess highly specialized directional senses for orientation, navigation, homing, and migration, including the ability to detect the Earth's magnetic field. These uncanny abilities permit birds to occupy distinctive wintering and nesting grounds, thus expanding their usable habitats. Some migrations, such as that of the Arctic tern, involve a circumatlantic migration from Alaska to the South Pole.

There are some 9700 species of birds living today, and most species are particularly well known. However, the relationships of the higher categories of birds are still debated. Of the 9700 species, some 5000 species belong to the order Passeriformes, the perching birds or songbirds. The number of avian orders is still controversial, and texts show different arrangements. Because the situation is in flux, a fairly conservative system is used below (fossil groups are designated by a dagger).

I was knowing that you have got a passion for aircrafts, but never knew that you've passion for all the flying objects, dead or alive. Your blog is a nice detail about aves. Keep continue. 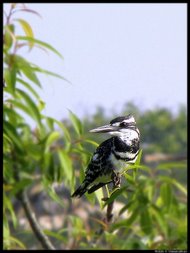